About the Los Angeles Theatre 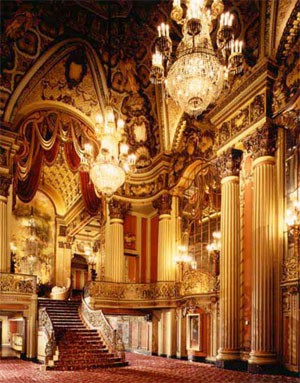 The Los Angeles Theatre was the last and most extravagant of the ornate movie palaces built on Broadway in downtown Los Angeles between 1911 and 1931. Designed by architect S. Charles Lee with a French Baroque-inspired décor, its majestic six-story main lobby and 2,200-seat auditorium of carved plaster ornamentation, mirrors, and cove-lit murals recall the glamorous days of 1930s Hollywood.

The Los Angeles Theatre, located in the heart of the downtown Los Angeles historic district at 615 S Broadway, is available for rental to a range of events including film screenings, stage performances, and special events such as parties, weddings, and receptions.

The auditorium holds 2,000 audience members on the orchestra and balcony levels. The grand lobby, ballroom and restaurant can accommodate an additional 2,000 patrons. These spaces, as well as other smaller spaces, are also available for more intimate gatherings.

The auditorium is equipped for live stage performances and film screenings. The lobby and ballroom are ideal for gatherings, parties, receptions, and weddings. The Theatre can accommodate your event or performance in the opulence of 1930s Los Angeles.

To book the Los Angeles Theatre for an event, contact Event Programming at events@btgla.com or by phone at 213-488-2009.

Arrange a site visit today by contacting manager@losangelestheatre.com, or phone (213) 629-2939.

Facts about the Los Angeles Theatre