On June 26, 1911, when a brand new theatre opened in downtown Los Angeles called the Orpheum, the population of Los Angeles was just over 300,000. Fewer than ten percent of the city's residents owned an automobile. Hollywood was still just a village and motion pictures were silent. D.W. Griffith was a couple of years away from directing his seminal epic Birth of a Nation and Charlie Chaplin was a British vaudeville performer who had yet to step in front of a movie camera. 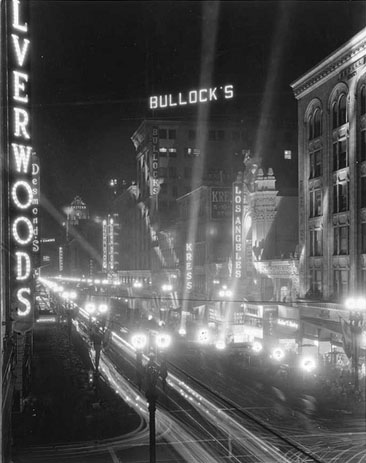 The reigning form of popular nightlife entertainment at the time was vaudeville, and that was precisely what the Orpheum Theatre was created for. Designed by architect G. Albert Lansburgh based on a Florentine early Renaissance palazzo, it was the first vaudeville theatre constructed in Los Angeles by the famous Orpheum chain, and it was a stunner. With three levels of seating and nearly 2,000 seats, it was meant to impress—and that it did.

The Orpheum was built on Broadway in downtown Los Angeles, which at the time was the city's main commercial thoroughfare. It was where people went to shop, dine, dance and be entertained. Two other vaudeville theatres had already been built on Broadway the previous year—the Cameo and the Arcade—but in June of 1911, the Orpheum was the new, hip hot spot in town.

Over the next few years, the biggest names in vaudeville performed at the Orpheum: Al Jolson, Harry Houdini, W. C. Fields, the Marx Brothers, Sarah Bernhart and an up-and-coming kid named Jack Benny. If you worked in vaudeville and you wanted to play Los Angeles, you played at the Orpheum.

Broadway also had room for the legitimate stage, which welcomed the opening of the Globe Theatre in 1913. With a seating capacity of only 782, it lacked the grandeur of the Orpheum, but it took its place among the growing cluster of ornate theatres lining Broadway.

At the same time, the popularity of motion pictures was growing at an incredible rate. The increasing demand paved the way for more theatres to be constructed on Broadway, not just for vaudeville or legitimate theatre, but for movies.

First came the Rialto Theatre in 1917—a nickelodeon that was purchased two years later by Sid Grauman, whose Chinese Theatre in Hollywood would soon become a city landmark. Grauman also built another palatial movie theatre on Broadway, the Million Dollar Theatre, which opened in 1918.

In 1921, the Loew's State Theatre on Broadway opened its doors, dethroning the Orpheum as the Broadway theatre with the largest number of seats. With a seating capacity of 2,450, the Orpheum sought the best of both worlds, by hosting both movies and live vaudeville performances.

To help maintain vaudeville's popularity in the face of growing competition from movies, the Orpheum circuit constructed a new vaudeville theatre on Broadway in 1926. They called this new theatre the Orpheum, and changed the name of the original Orpheum to the Broadway Palace. The new Orpheum was now the center of the vaudeville circuit in Los Angeles, while the Broadway Palace was relegated to musical comedy and variety shows. While the strategy was successful in attracting top talent, the success would be relatively short-lived. A technological breakthrough had been made that would change the world and usher in the demise of vaudeville as America's leading popular entertainment medium.

Since the early 1920s, the motion picture industry had been experimenting with ways to bring sound into the moviegoing experience. They devised a way to record actors' voices during production and chemically add the sound track onto the film being run through the projector. For the first time, people could hear the actors speak, move and sing in time with the action on the screen. The talkies were born.

The first talkies were short films, and few theatres at the time had the requisite equipment to show these films. It was inevitable, however, that film studios would begin to make feature-length talkies, and that theatres across the country would be engineered to show these films to their audiences.

On October 6, 1927, The Jazz Singer premiered in New York's Warner Theatre, becoming the first feature-length "talking" picture. But the night before, on October 5, a sneak preview of the film was held at the Tower in Los Angeles, a newly constructed theatre on Broadway that had just opened that July. The Tower was the first movie theatre in Los Angeles to be wired for sound, and the sneak preview of The Jazz Singer—held one night before its official premiere in New York—makes the Tower the first movie theatre in the world to have publicly shown a feature-length talking picture.

That same year, United Artists, the movie studio that had been founded by four giants of the motion picture industry—Charlie Chaplin, D.W. Griffith, Douglas Fairbanks and Mary Pickford—built a new theatre on Broadway called the United Artists Theatre, devoted exclusively to showing films made by their company. By this time, Broadway had become home to nearly a dozen movie and vaudeville palaces, each with its own distinct architectural beauty. And it wasn't finished. Broadway had one more magnificent movie palace in its future, and in many ways it was the district's crowning achievement.

In January 1931, the Los Angeles Theatre opened its doors after months of development, despite having been in danger at one point of being cancelled from going behind schedule and over budget. The opening of the theatre had been planned to coincide with the world premiere of Charlie Chaplin's latest film, City Lights, and to ensure that the theatre would open in time, Chaplin ended up investing some of his own money into the project.

The opening of the Los Angeles Theatre is forever linked with the premiere of what many consider to be Chaplin's greatest work. Yet despite this auspicious beginning, the Los Angeles Theatre proved too expensive to maintain. Within just three months of the theatre's opening, its owner, exhibitor H. L. Gumbiner, was forced to file for bankruptcy. By the end of that same year, the theatre was closed, until it was later re-opened as a second-run movie theatre by William Fox, who had acquired the building in bankruptcy court.

One last Broadway theatre—the Roxie—was built in 1932, earning the Broadway Theatre District a distinction for having the world's highest concentration of movie palaces in a six-block area. But as Los Angelenos began to find other options for their entertainment throughout the city, and as the proliferation of automobiles made it easier for people to travel to these other options, the Broadway Theatre District entered a period of decline. The palaces no longer attracted the same kind of audiences they once did, and over the next several years, they were either closed and sold or converted into second-rate movie theatres and retail spaces.

Nearly a half-century later, on May 9, 1979, the federal government's National Register of Historic Places placed the Broadway Theater and Commercial District of Los Angeles on its list, making it the first and largest historic theater district in the country to appear on the National Register. By then, however, these once-grand movie palaces were either in a state of disrepair or were no longer in operation. Some had been converted beyond repair into retail spaces and some were simply no longer in existence.

In 1982, the venerable Los Angeles Theatre was facing demolition, when business leader Ezat Delijani decided to purchase the building with the intention of preserving it for its beauty and historical value. Delijani and his family later purchased three more theatres on Broadway—the Palace Theatre, the Tower Theatre and the State Theatre—and formed the Broadway Theatre Group, with the goal of restoring these theatres as part of a larger initiative to revive Downtown Los Angeles as a thriving center of city life.